would it be ok to post fan fiction in this community...? are there guidelines for that here?

"my mind rebels at stagnation." sherlock holmes, by way of jeremy brett's handwriting(or at least as much of an interpretation i could muster, considering there's only two or three examples of his writing to reference.) and you can't see it too well, but i included holme's Persian slipper for his pipe tobacco. 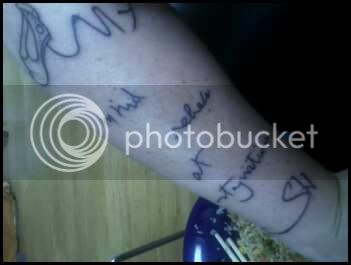 i'm sorry if i'm bombing the fuck out of this community, if that's not cool let me know.

so i came to jb in a very round about way, or maybe not... if cliche's abound in my post, i apologize ahead of time. i'm a recent,and i do mean recent sherlock holmes fan. i had seen maybe one, two of basil rathbone's movies as a kid, and of course i was always into the great mouse detective. but that is where it stops. having already seen benedict cumberbatch version over and over i was bored with it and wanted more of that character so i said what the hell, adventure's was the only other version on netflix and i decided to give it a go.
and i was floored, it's only been a week and i had to get a pipe because of this. i feel like this show will be a gateway into so many different studies, and it's all down to brett's energy. then of course i hoped onto imdb and i was gobsmacked by the fact that he was freddy in my fair lady! i had seen that too many times to count.love figuring shit like that out!
also, and i hope that i'm not being forward? scandalous? whatever word i'm trying to get at. but as a gay man, it's always great to find out about a brilliant person in the queer community,a real ace. i hope to get better acquainted with his filmography in the future. hope to toss some graphics out soon, also does anybody know where i can get brett's dorian gray? i wanna see that real bad.

A kind email from a fan today alerted me to the news that Jeremy's boyhood home at Berkswell Grange is on the market.

You can see the realtor listing here with plenty of lovely pictures, and if you have a spare £1,680,000 laying about, the property can be yours!

On Wikipedia a few years ago, on the late actor Paul Shenar's entry, it said that the American actor had been romantically linked to Jeremy Brett. Once a group of fans became aware of this and to talk about it on a Holmes forum the entry was quickly modified by someone who clearly found the entry distasteful or wanted to believe it entirely untrue. However, rumours of the relationship continued, fuelled by a photo of Jeremy and Paul together with matching smiles and vests on a beach.

Previously it has been suggested by Terry Manners that Jeremy first saw Gary Bond in 'Joseph and the Amazing Technicolor Dreamcoat', and subsequently formed a relationship with him in 1973. Elsewhere it has been suggested that Gary and Jeremy's relationship lasted seven years, and started when Gary met Jeremy backstage during 'A Talent to Amuse' in 1969. But according to actor's agent David Graham, Gary’s relationship with Jeremy started earlier, in 1963, when Gary Bond was on tour with 'Chips With Everything' in New York.

Had it been within my power to choose, Gary bond would have become my life’s companion.  When ‘Chips With Everything’ was brought to New York [which was in 1963], he was among the original British cast that came with it. Ashley-Steiner had been asked by his agent to represent him, and I was the luckly bloke assigned to look after him. Young blonde and handsome he stuck me as the most beautiful man I had ever seen. One Saturday afternoon between performances Gary came to my apartment for a drink and a snack. We ended up in bed together and I was completely smitten. It was only afterwards I learned he was in a relationship with Jeremy Brett at the time. Page 263 - 264 of Casting About: a Memoir by David Graham

When Paul Shenar was planning a trip to London, he asked if I would give him some names to look up while he was there. I thought he would enjoy meeting both Jeremy and Gary, Jeremy because both he and Paul were actors of like stature. Less than a week after Paul's arrival in London Jeremy and Paul called to say they had fallen madly in love. They remained partners for about five years and as had Jeremy and Gary after their affair was over they remained friends until Paul's untimely death several years later.
Page 265 from 'Casting About: a Memoir' by David Graham

I want to remind everyone of the rules of the community, specifically rule #5:

5. Please do not screen or delete replies to posts made to this community. If there is a problem post or comment, leave it and let the maintainer know. I will check the community often, but if I miss something, contact me. Also, if you can't comment to a post because someone has it screened, or if someone deleted your reply, let me know that too. You can reply to me here on this post or contact me via the contact information on the profile.

This rule was put in specifically because the community has had difficulty with people posting snippy comments and then deleting them a few minutes later. It happens often enough that I suspect this is deliberate. Please stop. It interrupts the flow of conversation and it means the person you responded to cannot reply to what you have said.

We're human, and we've all commented in the heat of the moment then later regretted it. If that has happened to you and you want to delete what you said, please leave a comment saying that you have deleted your original reply. Thank you.

Hi, new to membership on the community though I have been watching it for a long time. I recently became aware of two books regarding Mr. Brett  that are now available both by Linda Pritchard.

The Photographic Guide to Jeremy Brett's Sherlock Holmes and On the Wings of Paradise, the story of her friendship with Mr Brett. Also available is the journal/memoir of her run to raise money for cancer research, which brought her and Mr. Brett together raising money for this worthwhile cause (I'm a two time cancer survivor myself) The Road is Long.

The Photographic Guide is chock full of never before seen (at least by me) images from the Granada Sherlock Holmes and is to die for.  It is available in both softcover and hardback editions.

I'm providing this link with Ms Pritchard's permission, in case anyone is interested--I'm not connected and don't benefit, just another fan who just discovered the book.  I wrote and asked her if I could share the link and she has given permission.